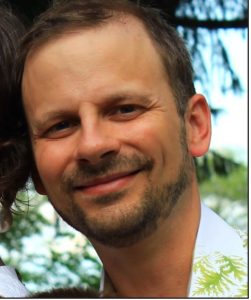 Dan Pell is an Academic Staff / Teaching and Learning Consultant

English, French, Mandarin, (and little bit of a dozen or so others)

I work in the Center for Teaching, Learning and Mentoring, advising and supporting instructors and instruction across a range of schools and colleges to improve curricular design and pedagogical practices.  My job is all about building trust and relationships. As such, it’s very much about communications. Like most at UW, I work 99% in English – but my other languages have also played a role, positively and (sometimes) negatively, in affecting how I build relationships, how I relate to others, and how I am perceived by others.

How do you feel your language (s) contribute (s) or add value to your work or studies?

I worked most of my career as an English language teacher, working with multilingual students, both in those students’ own countries and in a foreign or second language setting. Apart from Russian which I studied formally in college, all the skill I have in language has come from the demands of the situations I was in or relationships I built.

One way that language adds value is in allowing me, at a minimum, to put myself in a position of acknowledging my students’ identity, and reversing the power dynamic of “expert/learner”. I think in a small but real way it acknowledges a dimension of students’ lives, where I am an outsider and novice. I also think it acknowledges that learners have an identity which is different from what we perceive of them through English.

On a practical level, knowing even a little of my students’ other languages also gives me the ability to keep track of what they are saying and doing when they are speaking in other languages, and to offer help, encouragement, and compliments. It connects my work as a teacher to their past experience as a learner in their home countries. I also think that the experiencing the limitations of my own language and literacy in places where I have worked and studied overseas has built empathy for students who are in that situation now. I can recall being in situations overseas where I felt very isolated, and meeting someone with just a few friendly words in English was a huge boost to my morale. These experiences allow me to recognize when I may be able to help — and also makes me more attuned to look for and react to people’s feelings, even if they are not able to fully and naturally express them through their English.

As a teaching and learning consultant, I regularly work with partners who are experts in fields of which I have no professional expertise (engineering, social sciences, medicine). Being able to communicate effectively and operate in these situations in many ways draws on the same kinds of skills that have allowed me to function and learn in an unfamiliar language environment. And in fact, a lot of the benefit which I bring to these partners comes builds off the recognition that a lot of “content instruction” is, in effect, building literacy and supporting students as they build a new professional identity.

Have you ever experienced or observed linguistic prejudice or discrimination?

Linguistic discrimination is endemic in the hiring process. After watching a job talk by candidate who speaks fluent English with a prominent accent, others in the room expressed surprise that he seemed capable of doing the job he was applying for, even as a finalist.  Another person I know was turned down on multiple occasions for jobs for which she is qualified. She has asked for and received feedback, and there is a pattern where people acknowledge her qualifications and expertise, yet say “if you were applying to teach French…”. Judgements like “almost a native-speaker” are very prevalent. All these incidents point to a perception that people who speak English as an additional language, or with an accent, are inherently less credible than other candidates.

The widespread mispronunciation of students’ names by faculty and staff is another example. The campus only recently adopted Name Coach, which allows students to record their names. It is essential that we make the effort to use the tool and learn the names. Whether intentional or not, the unease which many Americans feel at pronouncing less familiar names can lead to certain people’s contributions and ideas being less frequently acknowledged, or others receiving credit for what had been shared work.

I lived in Northern Ireland throughout the years of the peace process, and multilingual signage (English, Gaelic, and Ulster Scots) had a significant place in that process. Acknowledging language is a way of recognized past wrongs, highlighting culture and diversity, and moving toward “parity of esteem”. Let’s develop a strategy for multilingual signage on our campus. Spanish and Mandarin would be a very practical reflection of the home languages of a large percentage of our students and their visiting families. Why not include our state’s indigenous languages? Why is there only one building on campus with a Ho-Chunk name? Could we partner with other midwestern campuses to make Ho-Chunk, Ojibwe and Dakota language classes available to staff and faculty online?

Let’s get the word out to students and staff that it really is OK and quite natural and necessary for international students and staff to speak languages other than English in class and in public as they navigate their formal and informal education.

And in hiring, let’s advocate for recognizing that multilingualism has cognitive and social benefits that go beyond the ability to have a conversation in another language. Let language be valued during the hiring process, even in situations in which it is not directly connected to the principal duties of a position. If we want to diversify our staff, a good start is to diversify control and the ownership of the hiring process.

Is there anything else you would like to add or questions you have?

I believe linguistic discrimination is vital focus for us in our time. It resembles and intersects with ableism, and racial, ethnic and gender-based discrimination. Those who experience one of those forms of prejudice also often experience linguistic discrimination too. It has not received nearly the attention or effort (in our campus, our community, our country). Just because we live in a present where monolingualism is a public norm, doesn’t mean we imagine and work toward a future will be different.