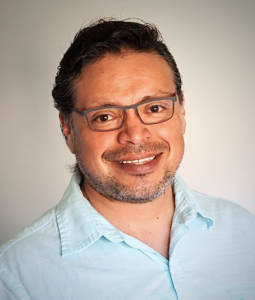 Diego X Román is a Faculty in Bilingual and Bicultural Education

I am an assistant professor in bilingual and bicultural education in the Department of Curriculum and Instruction. I conduct research and teach in the areas of bilingualism as it applies to schools and schooling. I work with multilingual populations mostly in Spanish-English speaking groups, but also with indigenous immigrants from Ecuador who live in Wisconsin. They speak Kichwa, Spanish and English.

Have you ever experienced linguistic prejudice or discrimination?

Not myself, but I think it’s because in my position as an assistant professor of bilingual education. So, when students or faculty interact with me, they immediately know that that’s what I do. If I were to teach physics or chemistry, then perhaps having an accent or being seen as a non-native English speaker presents a problem. But because the courses that I teach are about language and about bilingualism, I mostly interact with people who already believe bilingualism is important and are already open about these ideas.

I believe that representation matters. If you see yourself represented, that is, your identities, languages, gender, all of your identities in various areas, then you’re more likely to feel appreciated and valued. And you are more likely to engage in them academically or professionally as well as social, emotionally, culturally. For example, by not seeing Spanish signs or speaking Spanish formally beyond a specific context, it causes a lack of representation of the diversity that we have on campus and around the world. Also, it does not reflect the reality in which we live on this planet that is characterized by multilingualism. If we do not discuss multilingualism, we’re not preparing our students well.

To what extent do you feel others on campus value your language in the context of your work at the university?

I think my languages are valued. I wasn’t expecting that. I used to live in Madison 15 years ago for five years and then I moved to California and Texas and then back to Madison. I was used to Spanish-speaking environments in California and Texas. But I have been able to find a community of Spanish speakers here in Madison, inside the university and outside the university so I think it’s valued. There are spaces in which I use my Spanish for professional purposes. I would like to connect more the spaces, the personal and the professional.

In what ways do you believe the campus community can better recognize the value that linguistic diversity brings?

I think one of the challenges in the UW system, is that it’s a huge university and there may be people who are doing related work or at least overlapping work, and we could help each other in bringing or creating projects. Not only academically, but also culturally and socially to raise awareness. For example, connecting courses that are taught in the Spanish department, to business classes and have connections could be beneficial. However, I am not sure with whom I could collaborate to bring about some project that could help the multilingual community and students who are interested or university in general, in relation to Spanish-speaking communities.