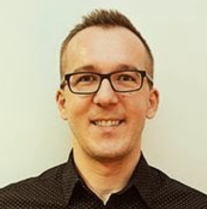 I’m a Lecturer in Slavic at the Department of German, Nordic, and Slavic+ where I teach Polish language and culture courses. Language is at the very core of my work here at UW-Madison. Currently, I am teaching two Polish language classes at the elementary and advanced level. Given my background in Slavic languages and linguistics, I try to explain how language works on a daily basis to help my students learn the language more easily and effectively.

How do you feel your languages contribute or add value to your work or studies?

Without languages, I wouldn’t be able to do the work I do now, which involves explaining how the Polish language and its grammar works to students who may not be familiar with languages other than English. Being a speaker of a language is one thing but being able to analyze and explain why we use language this or that way is a whole different skill. My background in linguistics and language learning (either through schooling or my own initiative) has helped me immensely to step back, notice, and realize the different patterns in which different languages operate. I find this incredibly useful in my language teaching, as I am able to build on phenomena typical for English or Spanish in my Polish classes. This also makes me more aware of how culture and cultural norms are encoded differently depending on the language.

Luckily, I haven’t experienced much of linguistic prejudice or discrimination, aside from occasional questions about where I come from, which made me think about my accent and how it makes others perceive me. But, in addition to standard Polish, I also speak a local dialect, which I only use with family members and friends. On some occasions, I do recall using a specific dialect word that they deemed “inappropriate” and tried to persuade me not to use it. Being a language person, I obviously declined and found its entry in a dictionary to show that it is a word that deserves respect, regardless of whether it is now considered dialectal or not.

Linguistic diversity has always been one of my goals in my all language endeavors. For me, being able to navigate several languages (and cultures) comes as an incredible perk that allows me to enjoy the products of various cultures, including literature, music, film, mass media, etc. While Polish and English are my main two languages, I also find it easy to navigate Slavic-speaking communities in general, regardless of whether my knowledge of their language is more active or passive.

Personally, I think that — due to several reasons of historical and political nature — we grow up with the idea that one person equals one language. Which, as we know from personal experience and historical research, is not exactly true, or the only way to do it. Thinking about linguistic diversity, I am always drawn to the example of Czech and German speakers in 19th-century Bohemia whose families would engage in the so-called Kindertausch, or children swap, where a child growing up in a Czech-speaking family would go to live with a German-speaking family and vice versa. This happened 150 years ago and was perceived as normal and necessary to ensure the children’s future success. These days, bilingual schools or school programs still cause controversy because some people think two languages will somehow “confuse” the brain. As a campus community, we can do a lot to change this, starting from demystifying languages and language learning (“science is hard, but languages are harder”), detaching languages from their speakers (language ≠ person), promoting the value of learning languages and bi-/multilingualism (knowing a few languages should be as normal as learning a language), stressing the cognitive value of language learning (once you learn a foreign language, learning another one is much easier; language learning enhances your overall mental flexibility and information processing), setting language-oriented goals (every student should graduate with an intermediate knowledge of a foreign language), creating a language-positive environment through campaigns, events, and other campus initiatives, etc. The sky’s the limit!