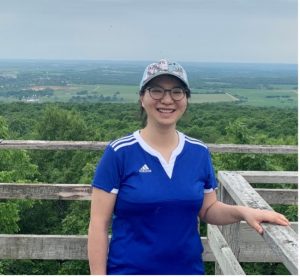 I am currently a dissertator in the German Program doing research for my dissertation about second language acquisition in German. My research also touches on learning experiences in German at UW-Madison.

How does language intersect with your studies?

Language intersects a great deal with my work and studies since I’m in the German Program where I both teach and study. I’ve learned that students take German for so many different reasons and come from many different backgrounds. They are not all native speakers of English. Student diversity has increased over the last decade, or so. It is important to make language programs not just for native speakers of English, but also speakers of multiple languages.

Could you explain more about how language programs could better accommodate multilingual students?

Although students speak so many different languages, language programs are still designed to target the majority of students, who are native English speakers. I don’t blame them. However, for students whose native language is not English, I don’t know if this is the right approach for them. For example, if we look at the language requirement, it is unclear if multilingual students must fulfill it, because they already know multiple languages. These are issues that are addressed clearly for native speakers of English, but not really for other students. I think this is something that people could be more aware of. We want all students to learn.

To what extent do you feel others on campus value your language?

Speaking about Mandarin Chinese, my native language, on campus it’s mostly for my personal use with my family and friends. I don’t know if it’s supported or no not.  For example, sometimes I have office hours with other TAs with whom I share a native language. Sometimes, we have a dilemma; should we speak Mandarin, or should we speak English? At times, it has felt wrong to speak our native language because it can be seen as excluding those who don’t speak it. Is there a difference between speaking a language for private use, with family and friends and professional use, such as office hours, or in class discussions? If so, where is the line? Who decides?

Linguistic diversity is definitely good because we become more aware of languages that we are not used to having in our environment, and we get to experience them. Instead of thinking, “why are they like that? Or why are they different?” those in a diverse linguistic environment meet and communicate which makes everyone a little more open-minded. People are different, but we are still human. Linguistic diversity contextualizes this, and it becomes real.

In what ways do you believe that the campus community can better recognize the value that linguistic diversity brings?

One helpful approach is to have different versions of languages for important newsletters or communications. It feels good and shows that campus is including everyone, not just the majority. Some people are not really able to fully understand or it would take too much time for them to understand what is happening in the newsletter if it is only in English. It’s so much easier if information, especially important news, or updates, is delivered in many languages, not just in English or in Spanish. I believe support for the international community on campus is something we should explore more, because there is an international community here and we have to get a better understanding of how to include it.