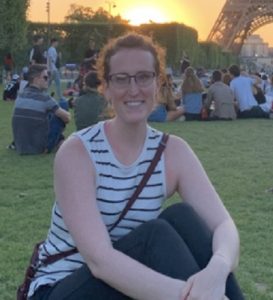 I was born and raised in Neenah, Wisconsin and graduated from the University of Wisconsin-Madison in 2017 with my Bachelor of Arts majoring in International Studies, French, Political Science, and a certificate in European Studies. I studied abroad for an academic year in Aix en Provence, France. I worked as a peer advisor for the International Studies Major during my senior year, and transitioned to full-time advising after graduation. I am currently the program coordinator and the academic advisor for the International Studies (IS) major. This means that I am the primary contact in the IS Major for all students, faculty, and staff on campus. My duties range from day-to-day academic advising, sessions on study abroad, career planning, event planning, program budget management, course scheduling, and alumni outreach. I work closely with other advisors around campus and currently serve as Co-Chair of L&S Advisor Consortium and the International Division’s Committee on Academic Staff Issues (CASI).

Professionally the role of French in my work provides legitimacy to both my students and/or prospective students that as a former IS major myself, I completed the language requirement. I feel my own language experience helps me more effectively communicate the deeper value of language learning. It also enables me to translate syllabi from study abroad programs in any romance language. My own study abroad program was such an enriching experience, and language played a key role in developing a new perspective that I now incorporate into my advising philosophy.

How do you believe that languages add value to your work?

Through language study, the students I advise gain marketable and valuable skills that help them stand out in crowded and competitive job markets. Most of our students want to work in fields where the minimum expectation is fluency in at least two languages. Language defines and reflects how a culture interprets their reality. It is important to think about the role that languages play outside of a functional exchange of words, or literal translations. It’s a reflection of different understandings of the world: how one chooses to use their language represents a unique understanding. The longer you study language, the more you can appreciate this value.

To what extent do you believe others on campus value your languages in your work?

In IS, most people value language skills as an integral part of our academic and professional identity. In my own work, for example, my ability to speak French, or to talk about the value of languages in IS, lends legitimacy to our program when speaking with distinguished campus visitors and prospective students and families.

In what ways do you believe the campus community can better recognize the value of linguistic diversity?

I think that the first answer is funding it. If you really want to support something, you need to support it financially. There’s a larger question on the value of starting languages at a younger age. If this is done, it doesn’t require the University to be the primary investor in language learning. Our campus community does, broadly speaking, recognize the value of linguistic diversity through its wide range of language offerings. It requires rethinking what language learning looks like in a K-12 environment: what kind of languages are supported and how are we supporting them? The Language Institute does a great job of trying to address these questions. I think it goes deeper than just what campus can do, however. The university shouldn’t be the only remedy or the one place where languages start to be valued.

I personally have not experienced linguistic prejudice or discrimination. When I was studying abroad in France, people were incredibly supportive of my efforts to improve my French language skills. In the US, there is certainly a longer and more disturbing history to linguistic prejudice. The prejudice I see tends to be related to the fact that students are taught to pursue and value European languages above any others. This is enforced through most high school curriculum, though it is slowly changing through some high schools offering Chinese or Arabic, for example.

In my own language studies, I had a lot of peers who absolutely did not see the value in language learning. They mocked the path of study I chose because they didn’t understand the value. Again, that’s very surface level language discrimination, but it’s the unsurprising outcome of being speakers of a major world language.

Is there anything else you’d like to add or any questions you have?

We tend to approach the support of language studies through the value that it can bring in this positive, almost rose-colored lens. Maybe, we need to approach evaluating the value of languages from a much more cynical perspective. When you look at the history of colonization or oppression, really all over the world, colonizers very much recognized the power and role that language plays in protecting culture and in empowering people. That power of language is likely the very reason that they oppressed it, forcibly prevented people from speaking it, or sent people to schools to teach their culture out of them. It was seen in Ireland with the oppression of the Irish by the English, or with Native American communities in the United States who were sent to boarding residency schools where their languages were banned. Colonizers recognized what that power was, and that’s why they chose to oppress it. If it wasn’t that valuable, they wouldn’t have bothered. If it wasn’t that powerful, they wouldn’t have bothered to get rid of it or forced people to assimilate or oppress it. This is maybe the more cynical view to take with it. A slightly more positive view of the value of language can be seen in France for example, with L’Académie Française and their monitoring of language use and development. While elsewhere the value of linguistic diversity can be seen in countries with multiple official languages to reflect multi-cultural populations.