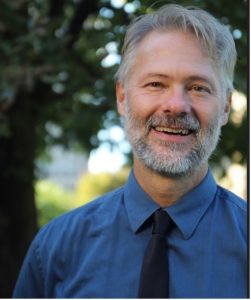 I am a professor of Nordic studies and I research and teach about Nordic folklore. Although much of my teaching is in English, it depends on being able to read scholarship in the Nordic languages and being able to interview people in their native languages

How do you feel your languages contribute to your personal identity?

Knowing the languages I know shapes my identity in countless ways. I feel part of conversations and the flow of ideas that have gone on in each of these languages and the cultures they support for many centuries. I see events unfolding in the United States from a comparative dimension because I know these other cultures, and not just in a way that I would get through reading journalism in English, but through reading newspapers or listening to interviews, or having conversations with people in their own languages.

How do you feel your language contributes or adds value to your work or studies?

Without integral and essential knowledge of the languages of the communities I study, my research would be totally dependent on what others write about these cultures in English. I would not be able to come up with my own ideas about these cultures or approach them in my own way but would rather be confined to seeing them in the ways that others who do know the languages present them. My research and my understanding would become less independent and less reliable I believe. It’s sort of the difference between hearsay evidence and a real interview: when you can speak directly to the people you’re interested in knowing about, it makes a world of difference.

I did part of my graduate studies in Finland in the 1980s and I did sometimes feel a sense of marginalization there. If people knew I was American they assumed I wouldn’t know their language and wouldn’t be capable of functioning competently in an academic or even an ordinary discussion in Finnish. As it happens, my surname is French, and I grew up in a French-speaking household, so whenever I was first introduced to new people, many Finns would fear that they would insult me if they spoke English. They believed that all French speakers loathed English. And since very few Finns spoke French at the time, they had to let me speak to them in Finnish, which they would not have permitted if they knew that I was American! And then when they realized that I spoke the language fluently, they decided that I must not be a foreigner at all but rather someone with a Finnish mother or relatives. So, there was this feeling of being viewed as alien that was sometimes irritating or demeaning. I can laugh about these situations in hindsight, but they were hurtful at the time and I know that prejudices toward people from other language backgrounds are not unique to Finland.

There is an important notion of “language visibility” that I believe is important to cultivate and support on our campus. Although many of our students across campus have learned Spanish in elementary and high school, they often seem afraid to speak in Spanish, even just to give a greeting or use an idiom or two. I try to model an openness to using other languages in my English and to welcoming it when others employ words or expressions from their own languages. If I don’t understand a word they are using, I ask and I commit it to memory for the next time! And I introduce my students to words in Finnish and Sámi, and challenge them to learn and appreciate them. So often in a classroom at UW we are sitting on a wealth of varied language expertise but it’s somehow taboo to share and celebrate it, I think. And that diminishes us all. Here’s a good example of what I mean. In Sámi, when you are saying goodbye, you distinguish who is “going” and who is “staying.” So, we say (and I won’t get into the dual and plurals….) “Mana dearvan” to the person who is leaving, while that person says “Báze dearvan” to the person who is staying behind. In traditional Sámi culture, it seems that there is always one person leaving and one person staying behind. But then when people started using the phone in the 1960s, and then producing television programs in Sámi in the 1980s, it became a question of who says what. And so, people came up with the new expression “Eale dearvan”, “live well!”. That can be said without a judgment about someone leaving or staying. But it also takes on all sorts of meanings in the pandemic and is just a beautiful thing to wish someone. So I say to you now, “Eale dearvan!”