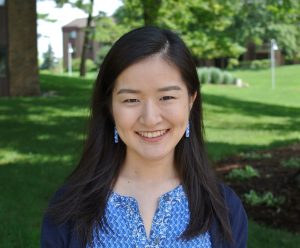 I am a third year PhD student in the psychology department, and I research how children learn about the social world, such as social categories.

If you are a student, are you enrolled in language classes? Why or why not?

No, I am not currently enrolled in language classes as I am focusing on completing coursework and research that more closely aligns with my degree.

I feel that having a good command of Japanese and being bilingual gives me insights into how Japanese culture and cultural differences might give rise to different ways in which people think. That is what I study in my area of research; how people come to think in the way they do. So, I think having grown up in multiple linguistic and cultural spheres definitely add to my work.

Since not a lot of people on campus speak Japanese (that I know of), and I don’t really do work that uses Japanese, I don’t have a good sense of how others on campus value Japanese. People do value English, because it is the dominant language on campus.

Unfortunately, yes. I have experienced micro aggressions related to my non-native English speaker status. I am also aware that stereotypes, prejudices, and discrimination based on languages and accents exist in our society, which may make students, including myself, nervous about speaking in front of others because they are afraid of being seen as less than. I do feel that we do not talk enough as a campus community about biases based on linguistic diversity. If we are talking about diversity and inclusion on the dimension of race/ethnicity, we should be talking about diversity and inclusion on the dimension of languages and accents as well, because they often intersect.

I believe that linguistic diversity carries cultural diversity, which means there are more perspectives, experiences, and skills being brought to the community when linguistic diversity is actively included. As a concrete example, there are concepts for which words exist in one language but not others, and a speaker of that language can bring ideas that exist because that word exists. I have also experienced that linguistically diverse communities are more welcoming and kinder, which I think makes the community “richer” because it allows people to be more vulnerable, and open to learning from and teaching others.

As I mentioned above, I think that recognizing that there are biases based on language, and actively combatting that is an important start. By recognizing that not being a speaker of mainstream American English, for example, is a strength rather than a weakness, we can be more inclusive to diverse experiences and perspectives.