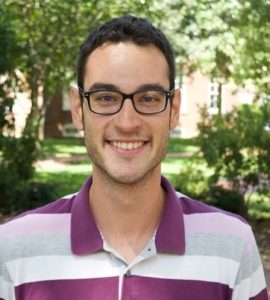 I am a Ph.D. candidate in the doctoral program for the second language acquisition. I’m also a TA in the Spanish and Portuguese Department. I’ve always been very interested in languages, and I was also very motivated about teaching languages. I studied translation and interpretating in Spain. Then I started a master’s in Delaware in Spanish Literature and second language pedagogy. I got very interested, not only about teaching languages, but also about how languages are learned.

How do you feel that your languages contribute to your professional and personal identity?

Personally, I would say that it makes me more of a global citizen. It gives me so many options to meet new people around the world and travel. For my professional identity, it is  an asset for me to find potential research topics and also making connections to other professionals around the world. For example, I could talk to a researcher from Spain or from Mexico, but I could also talk to other researchers in French or English too. It expands my ability to communicate with others. Also, I studied translation and interpreting in Spain. So, it is another outlet for me to look for jobs if  I know different languages. But also being able to teach a foreign language. I am a teaching assistant, and I don’t like using the term native speaker, but, being a native speaker is perceived as something beneficial for the people in the Spanish language program and contributes to that part of my identity.

Can you speak about why you don’t like using the term native speaker?

How do you believe that linguistic diversity adds to the richness of the various communities you navigate?

Also, sometimes I do like having people to speak Spanish in the US because sometimes you miss speaking your own language, so it is nice to have people that you can just have a casual conversation with in Spanish. I like listening to other languages. I really appreciate it but again, I might be biased.

I went to a workshop about campus multilingualism, and they suggested using signs in multiple languages.  I liked that as a reminder that there is more than one way of doing things.