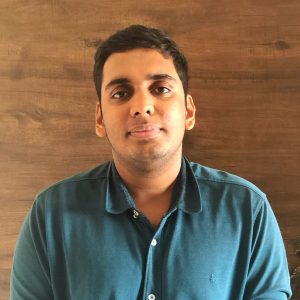 I speak English, Hindi, Marathi and Tamil. So Hindi is the most popular language in India by a good number and then Marathi and Tamil are regional languages. Hindi is my native language, Tamil is my mother tongue and Marathi is the regional language where I grew up. I am a junior double-majoring in computer sciences and statistics and I do a certificate in mathematics. Other than that, I like to play piano and harmonica.

To be completely honest, not too much, because I won’t be using Hindi here. There are few courses on campus that are in Hindi, but personally, I’m not very interested in those courses because I know the language and I’ve studied it enough at home to study it at the university.

Firstly, it enables me to communicate to a good portion of the world as Hindi is spoken in most of India and Tamil in some part of India. But that would be generalizing it too much because there’s just too many languages there. In a very general sense, these languages just enable me to connect with people better. When you go to a country or a region, if you’re able to speak that particular language, the people are more likely to understand better and there’s a stronger connection.

I think that it helps me to better learn languages and I really like learning languages! Unfortunately, I don’t have enough time for that. I tried to learn Spanish and I didn’t find it to be very challenging, but like any other language, I need to dedicate time to it and I just couldn’t find that. But professionally, I can comment on how much it has improved my learning and understanding. I read studies that say that being multilingual often helps you grasp things faster, so maybe that’s a benefit, but I can’t really say that for sure, because I also know people who are not multilingual and who pick up things fast too. But maybe it has helped that aspect and professionally, I think it’s just nice when people see that you will have the ability to speak multiple languages and the fact that you’re eager to learn!

When it comes to value, I think it’s about whether there’s an actual use for the language professionally. Then, I don’t really expect anything from them if there is no real purpose to use further language, but at the same time, I’ve never really seen anyone express hate or any kind of bias against my languages.

No, but it comes from a very different standpoint. For me, English is a primary language, but there are many students for whom English is a second language, so they often struggle. So, I can’t really speak from their perspective but personally for me, since my English vocabulary is good, I haven’t really faced any kind of discrimination.

I don’t want to pinpoint anything but maybe things like screening international films on campus. I think they do, but maybe, more marketing and publicizing on the university because I know the Union Marquee but I’m not sure if they do international movies. Maybe that would help but I can’t really say for sure. Personally, I’ve never been to one, but maybe there are many other people who might be interested in this.