Credentials: Languages: English and Swedish (and others) 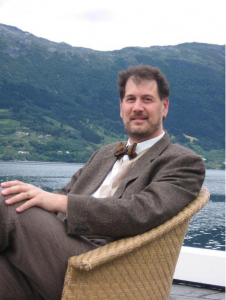 English and Swedish, and can understand Danish, Norwegian, and Icelandic. I have a little bit of German, French, Spanish, and Russian, too.

Could you tell me a little bit more about yourself?

I teach in the Scandinavian Studies Program where most of my work is in medieval and folklore studies. My current research falls into two categories: oral theory with a group of poems from Iceland known as the Poetic Edda. The second category is the narrative culture of the Åland Islands, which sit between Sweden and Finland. They are Swedish speaking, which means that they are a minority language within Finland.

How do you believe your languages contribute to your professional or personal identity?

It is impossible to have my professional identity without languages. I tend to bring language even into the culture classes because you cannot talk about a culture without knowing at least a small degree about the language. Language informs the way that we think about the world. For example, many people have heard the claim that Innuits have 17 words for snow. This is because it is vitally important that Innuits know what type of snow they are talking about, since there is so much of it in their climate. Whereas, in Wisconsin, we use adjectives to describe a few different kinds of snow (e.g. popcorn snow, which is the Styrofoam sounding snow when it is below zero). If you live in a culture where understanding the type of snow is crucial to your survival, there will be a word for it. You cannot really divide out culture and language. As far as my personal life, language gives me windows into so many kinds of people, the way they think about the world and their culture. It even makes opaque what in my culture is transparent. We all grow up and we think that the way we do things is the only way to do things. So, we quite frankly do not really thing about the way we do things, right? Expanding your world view changes this.

How do you believe your languages contribute and add value to your work?

It brings the value of making things visible for me and also of communication and contact with other human beings. My Russian is not great, but I can say “hello, how are you?” and make someone smile a little bit. This demonstrates that you care enough to at least learn “hello.” It demonstrates empathy. Because I have limited Russian, it gives me an added reverse value that when I meet somebody on the street who does not speak English, I have that experience of only knowing how to say “hello” and “thank you.” A very valuable experience I had was going to Egypt where I was not only unable to speak Arabic, but I was also illiterate, even with regard to numbers. I could not even get on the correct bus. I think this experience helps me have more empathy for the person who maybe is illiterate or cannot speak the language, and then hopefully that dispels a little of my own privilege and arrogance. Hopefully, I have a greater empathy towards that person and humanity. Because if there is something we need right now, it is greater empathy in the world.

To what extent do you feel others on campus value your language in the context of your work?

That is very dependent on where I am. In Van Hise Hall, I feel like it is very valued. Before the language requirement changed, everyone needed to have two years of a language to graduate. You had to do those years in college, no transfer credit from high school. Many people had access to Spanish in high school and oftentimes very little else. Many times, it meant that people decided that rather than to continue on and decided to try something else altogether because of the requirement to take a language. We had larger enrollments in less commonly taught languages. However, when the requirement was dropped, that changed almost immediately. It shocks me that there is not more collaboration around languages on campus. For example, collaboration between our School of Business and Van Hise makes a lot of sense because we live in a global economy. Sure, I can make the claim that everyone speaks English, but when I go to another country and they are speaking my language and cannot speak any of their language, I’m at a disadvantage. Oftentimes, even if you learn Spanish and knew it fairly well, but go to China, it would still give you language and cultural competencies that would help you look for those things which are transparent to you and look for cues. It is not just language, but language plugs into so many other aspects of life. If I behave as I do in the United States with a person from Indonesia and I hit them on the back and put my arm around them and do not realize that in Indonesian culture, this is highly offensive, I’ve just ended my relationship with this person I’m trying to make a business deal with. This is a problem. When I look on campus, there are moments when I do feel valued. I believe that there is a constituent on campus that believes that languages are valuable. On the other hand, there is another one that says, no, that is not valuable at all. Just do everything in English because English is a global language. I think it is very sad because it snowballs into bad behavior all around, globally speaking. I do not see how you can call yourself an educated person if you do not have a smattering of another language.

How do you believe linguistic diversity adds to the richness of the campus?

It adds to the richness of the campus because it breaks down some of this arrogance. It causes a person to feel slightly humble. There is nothing more humbling than walking into a language classroom and you know nothing. You go from being able to have intellectual conversation about largely anything to “See Spot run.” I would argue that even those of us who know languages should on occasion go back and try to learn another one, especially language teachers. It is important to remind ourselves what students are living with when they go into a classroom. They have lots of things that they want to say, and now they are doing it in the language where in the first years it is brought back down to “See Spot run.” That’s one of the places where it’s different than when you’re a kid. When you’re a kid, you may not have a lot of the intellectual ability to develop hugely complicated conversations in any way. You have that enthusiasm of wanting to learn something new without the baggage of wanting to say things that you can’t say. That’s why we really ought to be teaching languages in elementary school rather than waiting until when people get to college.

In what ways do you believe the campus community can better recognize the value of language?

Linguistic diversity makes language available everywhere. I personally would love to see Ho Chunk on all the signs on campus. Having all the signs on campus in both English and Ho Chunk would be an indicator that another culture was here first. And encourage the student body to take that language. And that is the beginning. Make language more visible on campus in a way. We do what we can to explain to people why language is valuable, but it is easy to intellectualize that and there is a problem when you discuss something intellectually that you never see. Maybe, we should not only have signs in Ho Chunk, but once in a while make temporary signs that you put up in German for a German Week and other languages so everybody is forced to remember that there is a whole part of the world that does not speak English. Because, if you go out into the rest of the world, how are you going to live in a multilingual world if you’ve never had exposure to it?