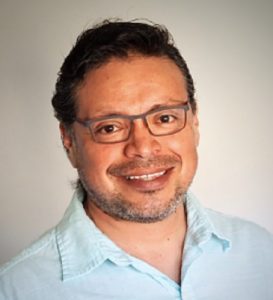 I am an assistant professor of bilingual and bicultural education in the Department of Curriculum and Instruction. My research and teaching center around two lines of inquiry: Bilingualism as it applies to schools and schooling, and the language used in science courses to discuss environmental topics with linguistically minoritized students. I work with Latinx and Indigenous Latinx communities attending schools in rural settings in the U.S., and with migrant Indigenous groups in the Galapagos Islands, Ecuador. The multilingualism of these communities includes Spanish-English, Kichwa-Spanish-English, and Kichwa-Spanish respectively.

I seek to understand how linguistically minoritized groups enact their language practices in the places they live. For example, I study how communities use their languages and how their languages have transformed in response to the natural contexts they inhabit. I also work with teachers to support them in building on the linguistic and cultural richness that these communities bring to their schooling experiences.

Have you ever experienced linguistic prejudice or discrimination?

Not directly. I believe that this is because of my position as an assistant professor of bilingual education, in which my multilingualism is recognized as an asset. In other words, I mostly interact with people who already believe bilingualism is important and are already open about these ideas. I am aware, however, multilingual communities are discriminated against in various ways outside and inside academia.

I believe that representation matters. If you see your languages being represented in formal and informal spaces, then you’re more likely to feel valued. For example, I really appreciate hearing students and professors speaking different varieties of Spanish on campus. In my research and teaching, I am very intentional in pointing out that there are Spanish-speaking communities in the U.S. and that Spanish should not be only considered a world language. I also engage in work that addresses the dual role of Spanish, that is, as a minoritized language in the U.S. and as a colonial language in the Latin American context. Through my work, I seek to highlight the diversity of Spanish-speaking groups and of Spanish as a language.

To what extent do you feel others on campus value your language in the context of your work at the university?

I think my languages are valued. I was not expecting that. I used to live in Madison 20 years ago for five years and then I moved to California and Texas and then back to Madison. I was used to Spanish-speaking environments in California and Texas. But I have been able to find various communities of Spanish speakers in Wisconsin, inside and outside the university.

In what ways do you believe the campus community can better recognize the value that linguistic diversity brings?

I think one of the challenges is that UW-Madison is a huge university and there are several scholars like myself conducting work in various areas of bilingualism (cognitive, social, linguistic, pedagogical, among others). It would be fantastic if we could create more spaces for these scholars to get together, not only among ourselves, but also invite students, activists, teachers, and other members of the UW and Madison communities to these conversations. This could help all of us in creating projects that respond to the realities of multilingual populations living in the area. In this way, we could collaborate in raising critical awareness to the value of being multilingual.