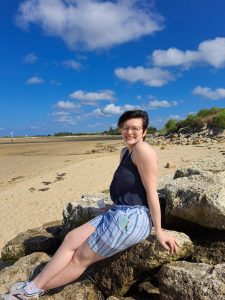 I’m a Japanese and East Asian Studies double major at UW Madison. I also am the treasurer of the Content Creator Club and I stream on Twitch regularly. Language is a massive part of my life both at school and personally. Of course, I am taking classes in Japanese and French, as well as studying Japanese culture. My languages help me significantly with that. For outside of school I stream primarily in English, but since people view my content from across the world, I often speak in French and Japanese as well, and my languages help me connect with a wider audience.

How do you feel that your languages contribute to your professional and personal identity?

I believe my languages are one of the most important parts of my identity. Learning and translating languages is my passion, so I bring them to the table regularly. I found the closest people in my life purely because I wanted to learn French, and now that I am, I can see the joy it brings the people around me when I improve. On the other hand Japanese is especially important to me professionally because my future goals include becoming a translator of the language, alongside English and French. Therefore a large amount of my life and identity is wrapped up in my knowledge of various languages.

How do you feel your languages contribute or add value to your work or your studies?

I think that Japanese and French both make my work and studies far more interesting. Speaking multiple languages opens the world to learning all there is to know written in those languages as well, and it means I have far more opportunity to examine the subtleties of how people interact and write. Different levels of social hierarchy, or regional speaking can be particularly interesting to examine, and cause me to reflect upon my own language as well.

To what extent do you feel others on campus value your languages in the context of your work and studies?

I believe that both of my languages are quite valuable, but that others are not always aware of the ways to best utilize them in contexts outside of language study. However, I have found professors are often open to one doing research in other languages such as Japanese and French to strengthen a point or argument I am making in my writing, and it is fantastic that this is encouraged.

I feel that I am in a lucky position to have not experienced any particular prejudice or discrimination directly. More often I receive an exclamation of surprise at the particular languages I study, but I find little harm in that.

How do you believe that linguistic diversity adds to the richness of the various communities you navigate?

My primary communities are extremely international, as I speak with people from across the world on a regular basis. My ability to communicate in various languages seems to truly encourage people and brings them happiness when I try to communicate in their languages or practice with them. For example, my speaking French not only brings people from France together in my community, but those from Quebec as well. There are members of my community from Singapore or Poland who also enjoy speaking Japanese with me, and I think that everyone’s experiences and interactions with each other are enhanced by our languages.

I would love to see professors more often encourage research and learning in various languages. I think there is a heavy English bias to learning and research in class. Yet we have professors whose native languages are from around the world, and I think that having them recognize what their own diversity and language brings to the campus community would help students see the same thing.