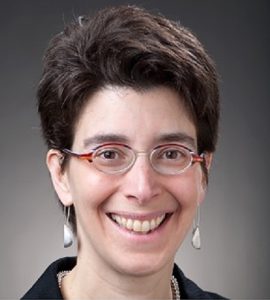 As a professor, I teach courses on topics such as child and language development. I do research focused on how babies and young children learn languages. My lab is at the Waisman Center, and it is called the Infant Learning Lab: https://infantlearning.waisman.wisc.edu.

Languages are deeply pervasive in both my teaching and research because I’m trying to understand how babies go from not knowing anything about a language to becoming fluent language understanders and speakers over the first few years of their postnatal life. I study how babies learn as monolinguals, but I’m also very interested in how babies learn as bilinguals, or even trilinguals. I think that language is probably the most difficult thing we ever have to learn. In my own work, I’m particularly interested in why it is that really little people, who can’t tie their shoes or cross the street safely, can learn the grammatical structures and the vocabulary of languages without being explicitly taught. Why is it that languages are actually easier for children to learn than adults, when so many other things are easier for adults to learn than children?

To what extent do you feel people on campus value languages, in the context of your work or studies?

Many of the undergraduate students who want to join my lab are interested in our research because they themselves are multilingual. I often think people who are multilingual are just more curious about how languages work because they have direct experience with the similarities and differences between languages. I find myself very frequently addressing myths that our students have about languages. One pervasive myth is that you shouldn’t expose babies to more than one language because that will confuse them – which is absolutely not true. Something that I try to really hammer home in my courses is that there are a lot of myths out there about language learning.

All the time. One place where we see it on our campus is in the words that we use when we talk about languages. We often leave out people who are users of Sign Languages. For example, the communication requirement on campus (e.g., CommB) has to do with oral and written communication. But of course, individuals who use Sign Languages don’t engage in oral communication. I also see language discrimination in how we think about and marginalize Sign Languages, despite the fact that they are full, rich, natural languages with all the structure and expressive power of spoken languages like Japanese or Italian. On our campus, Sign Languages don’t count towards the foreign language requirement, and we only teach two semesters of American Sign Language which I think is a big problem. In terms of other forms of language discrimination, the way we use timed exams in our classes may discriminate against people who are not native English speakers. That’s not really discrimination against a specific language, but it’s discrimination against people who are not native speakers of English and who thus process English more slowly than native speakers do. Another place where we see discrimination is when students complain that their TAs don’t speak “good” English. In our community, there’s also discrimination against non-standard varieties of English. A child might be labeled as having a language disability when they’re just learning a different variety of English at home than the standard variety.

There’s a really substantial bilingual community on our campus. But bilingualism has not been embraced in our K-12 schools, unlike many other countries (where bilingual or even trilingual education is mandated from an early age). While Madison has made some progress in this regard, with a few bilingual dual immersion schools, there’s very much of an English language focus here. My view is that every child should be in dual immersion language programs from as early as possible, ideally from infancy, to ensure access to multilingual development. It would be wonderful if our schools required exposure to multiple languages while children have the most likelihood of success at learning them, rather than leaving those requirements to high school or college (when language learning is much more challenging for many individuals).