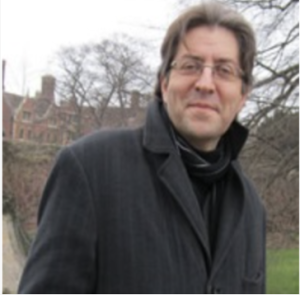 I was born and grew up in London, England. My parents were Hungarian, and so I grew up speaking Hungarian at home as well as at various Hungarian community clubs and events. I attended English schools, and it was in secondary school in London that I started learning French and Latin and later German. As an undergraduate I studied at University College London and earned a bachelor’s degree in German and Scandinavian Studies. I then moved to the US and did my graduate work at the University of Washington in Scandinavian Languages and Literature. I have worked as a Norwegian lecturer, an editor at a London-based international bibliographic service and in various academic administrative roles at UW-Madison. I am currently the Associate Director of the Institute for Regional and International studies (IRIS), a federally funded National Resource Center (NRC) that promotes and supports global and international studies.

The mission of IRIS NRC is to support and enhance global awareness. We offer cross-regional and globally themed programs, workshops, events and resources for K-12 and post-secondary educators, students, and the community at large. Language intersects here with our programming. For example, we have run professional development and pedagogy workshops for K-12 language teachers, and we run and sponsor international career fairs on campus including specifically ones on utilizing language skills in careers. I am also one of the academic advisors for the International Studies Major – we require all our students to have completed a foreign language to at least the fifth semester level at college. I also meet with students to plan out their coursework in preparation for study abroad, a key component of which often is language learning. IRIS NRC is also the administrative home for the Arabic, Persian, and Turkish Language Institute (APTLI). APTLI is an eight-week intensive summer program at UW that offers beginning, intermediate and advanced courses in these languages. Students who attend gain the equivalent of a regular year’s worth – or two semesters – of language instruction and learning. I work with an exceptional team of language instructors, pedagogy specialists, and language program administrators in APTLI, and our students, who come from all over the US to attend, show such commitment to learning the languages. The gains they make in eight weeks are remarkable.

How do you believe that languages add value to your work?

It is perhaps less about how languages add value to my work and more about how languages add value to the work and experiences of the students and teachers we work with. Our promotion of international studies, and specifically language studies, is central to our goals of enhancing global awareness and supporting informed thinking about the world around us.

To what extent do you believe others on campus value your languages in your work?

I am not sure this really comes up. I suspect that within the International Division and within the IS Major most people value language skills as they themselves speak or have learned other languages. In truth there aren’t very many Hungarian speakers on campus, and it is not a language that is taught here, so I do occasionally get to use it. For example, a few years back I translated some Hungarian surveys, letters, literature, and official documents for a professor of sociology who was working on a project with the Hungarian Academy of Sciences. It was a rewarding experience for me, and I believe it helped facilitate the partnership between UW and the Hungarian Academy of Sciences.

As someone who grew up bilingually, I am sure I did experience something along these lines. Although it may have been directed as much at my ethnicity or identity as it was to the language I spoke. However, I would also say that many people have shown interest in the fact that I speak Hungarian. Otherwise, yes, I have certainly observed linguistic prejudice and discrimination, usually directed at people who do not speak fluent English by people who are monolingual English speakers.

In what ways do you believe the campus community can better recognize the value of linguistic diversity?

I think the campus community does recognize the value of linguistic diversity. It is implicit in the broader diversity initiatives and programs on our campus. We also have the Language Institute, the Language Program Office, and the Wisconsin Intensive Summer Language Institutes who all work to promote, support and advance language study. The sheer number of languages our students can study at UW, the number of departments that offer language classes, and the number of students who study languages on our campus speak volumes about the value the campus community places on linguistic diversity.