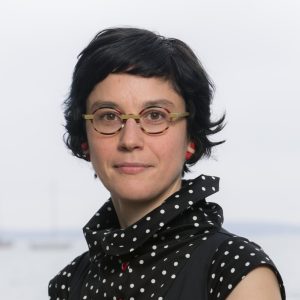 I am Associate Professor of Italian here at the UW. I was born in Yugoslavia (in its province of Serbia, which today is an independent country) and grew up speaking Serbo-Croatian. In then Yugoslavia and now in Serbia, multiple foreign languages are mandatory in both elementary and high schools, as well as at the university level. In elementary school I studied English starting at the age of ten, and then in high school Russian was added. Latin was also mandatory in the first two years of high school. I graduated high school with the knowledge of three languages, to which I added Italian as my major at the University, where there was another mandatory language (I continued with English) and another two years of Latin. I then pursued MA and PhD in Italian here in the US. So, I am a Serb teaching Italian language, literature, and culture in the US. I like to think that is very cool.

How do you feel your language contribute to your  personal or professional identities?

Languages have always intrigued me: I grew up speaking Serbo-Croatian, then started learning English at the age of ten in school. Making connections between the two languages, discovering similarities and differences between the two, was the most fascinating part of the learning process for me. And then, when I started realizing that language also shapes one’s thoughts and the entire worldview, I knew this was what I wanted to do in and with my life: find a way to make learning languages and teaching them to others my job. Learning the second mandatory language that was assigned to me in high school, Russian, opened up new horizons into the sphere of Slavic languages. Even though I never truly dedicated serious study to it after high school, I think that it had helped create new connections in my brain that govern my ethics and attitude toward life. One of the most important breakthroughs for me in language learning was attending two years of mandatory Latin in high school (and then another two at the university): sounding out words that had not been said out loud in “real” life for centuries, learning the complex grammar structures that were often very far away from my mother tongue, made me fall in love not only with Latin but also with the fact that I started realizing: languages connect us through geography and time, they open portals into other cultures and make us realize the different—and similar—ways of seeing and understanding the world. Yet they show us that even though we might be thousands of miles or years away, we all, deep down, deal with the same issues that are at the core of our shared humanity. That to me is the most fascinating thing about languages.

I say all this to explain that languages are part of who I am, not just of the work I do. Languages that I speak and read are an intrinsic part of who I am. I think differently in each one of them, and they all help me understand myself and the world on different levels. As I do research and I teach in both English and in Italian, languages are an essential part of my professional identity as well.

How do you feel your language contribute or add value to your work or studies?

As I work in the field of foreign literatures and cultures, languages are an indispensable part of my work. I enjoy sharing my knowledge and fascination with how different languages work with my students. Especially satisfying to me are my students’ own realizations of the awesomeness on language study. In the courses that I teach in English, which concentrate on Italian literary texts in translation, I enjoy talking about the original Italian and about the process of translation that is never perfect exactly because of the different ways of seeing and expressing the world in different languages. I think that adds a lot of value to my students’ learning.

My language skills are essential for the work I do, and I think that the campus values that by supporting foreign language departments and programs.

Luckily, I have not experienced prejudice or discrimination. I do get an occasional “Where are you from? You have an accent” reaction from people around, sometimes from students, but rather than getting offended, I take it to mean a sincere interest in my language and culture and I take that as an opportunity to talk about the importance of multilingualism and language learning process in general. People who live in monolingual communities understandably do not think about it too much, but I have found that they appreciate hearing about other cultures and are eager to learn.

Linguistic diversity—which is intrinsically also cultural diversity—is part of most communities I frequent. My favorite part is exchanging information about specific ways of saying, which are, by default, reflective of different modes of seeing and understanding, of experiencing the world around us. I have come to a point that there are some states or feelings that I can express in only one language because other languages I speak and/or read do not have a word or expression for that state or feeling. I think I have developed into a more complex person as different languages have helped me identify different parts of myself.

In two ways. First, through a more robust web of opportunities to speak about linguistic diversity, which to me, for the many reasons I have mentioned throughout this interview, is like any other form of diversity we rightly celebrate. Second, I think that the campus needs a more expanded language requirement that would expose more students to other languages and cultures at the college level. Right now, a vast majority of students use the high-school level language skills to satisfy the foreign-language requirement. What a policy like this fails to recognize is that languages are not a mere set of linguistic abilities, but rather complex systems that carry within them centuries and millennia of cultural heritage and ways of thinking that can be better and more properly understood by more adult learners. As our students ponder the most pressing issues of our time (such as racial and social justice, climate change, to name but a few) they could benefit immensely from a wider worldview and from looking at these issues through a lens of other cultures, which would provide depth to the study of these common challenges.